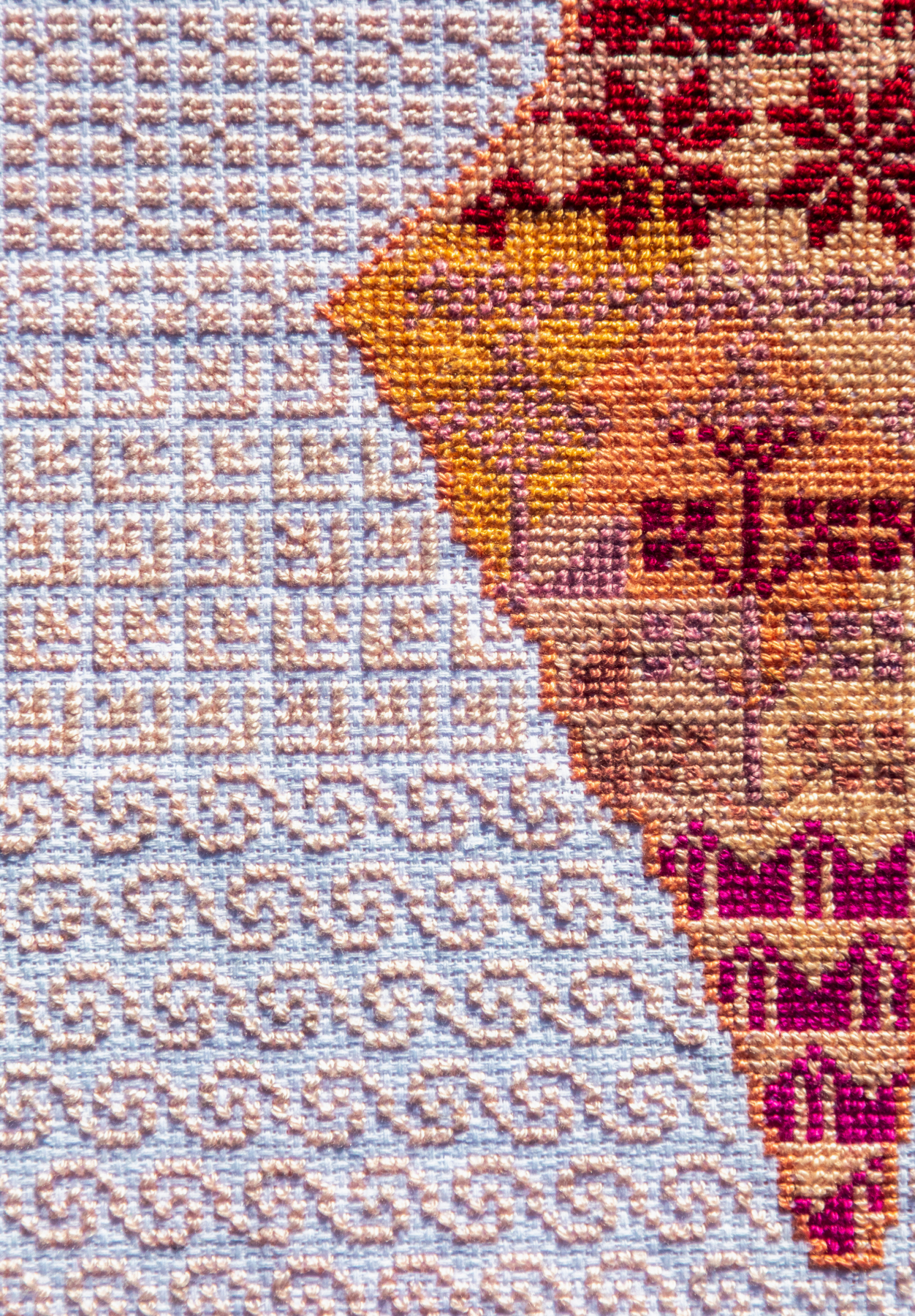 My Palestinian Skin, A Dream

Contemporary politics in the traditional Palestinian embroidery of Wafa Ghnaim.

Artist, author, and historian Wafa Ghnaim has spent much of her life researching information and story about Palestinian embroidery motifs. She and her sisters learned traditional Palestinian cross stitch from their mother, Feryal Abassi-Ghnaim, each girl starting at the age of four. In 2018, Ghnaim published Tatreez and Tea: Embroidery and Storytelling in the Palestinian Diaspora, a book that preserves 47 traditional motifs, illuminating their meaning and offering stitching instructions.

Palestinian embroidery, called Tatreez, is centuries-old, a skill almost always passed down from mother to daughter. Like most embroidery traditions, humanity is embedded within the work. Voices of women, silenced by political oppression, or at times by their own culture, lie deeply between the threads. During the First Intifada, between 1987 and 1993, Israeli soldiers confiscated Palestinian flags, excepting those worn on the body. Palestinian women responded with embroidery, incorporating the icon onto their garments.

The condition of isolation is ubiquitous in surviving Palestinian culture. Since 1948, all Palestinians have either been exiled from the terrain they identify as their homeland, or forced to live in occupied territories.  Ghnaim and her sisters were raised in Oregon, the only Palestinian family in town. Though they were met with tolerance, they grew up in the absence of shared community. Like many Palestinians, Ghnaim’s family enacted and preserved culture around their own isolated table.

Across the Palestinian diaspora, the ritual of stitching and wearing traditional dress celebrates identity and connection. Though Ghnaim most often chooses to

embroider wearable garments, during quarantine she was compelled to stitch a complete map of Palestine. Jewel tone threads in a patchwork of designs fill the shape of Palestine and its surrounds. She calls the work My Palestinian Skin, A Dream. Whether referring to the skin of the embellished cloth, or more literally to her own, the title acknowledges a longed-for identity.

A never-ending use of borders divides our planet, isolating geography into countries, one by one. The concept of diaspora evokes the energized purpose of sustaining a connection with a distant place, either real or imagined. For Ghnaim, embroidery is a daily practice of manifesting identity. Her stitches inhabit the boundaries of the map entirely, connecting to culture through motif, and claiming terrain to its edges.